According to a new market report published by Transparency Market Research (titled “Elevator Market (Deck Type –Single Deck and Double Deck; Destination Control – Smart and Conventional; Building Height – Low Rise, Mid Rise, High Rise; End-use – Residential, Commercial, Mix Block; Speed – Less than 1m/s, Between 1 to 3 m/s, Between 4 to 6 m/s, Between 7 to 10 m/s, Above 10m/s; Application – Passengers, Freight) – Global Industry Analysis, Size, Share, Growth, Trends, and Forecast, 2018 – 2026,” the global elevator market was valued at US$ 59.26 Bn in 2017 and is expected to reach US$ 151.26 Bn in terms of revenue by 2026, expanding at a CAGR of 11.1% from 2018 to 2026. In terms of volume, the market stood at around 773.8 Thousand Units in 2017. Asia Pacific is projected to show the fastest growth rate during the forecast period due to the increase in number of high rise buildings and rapid urbanization. 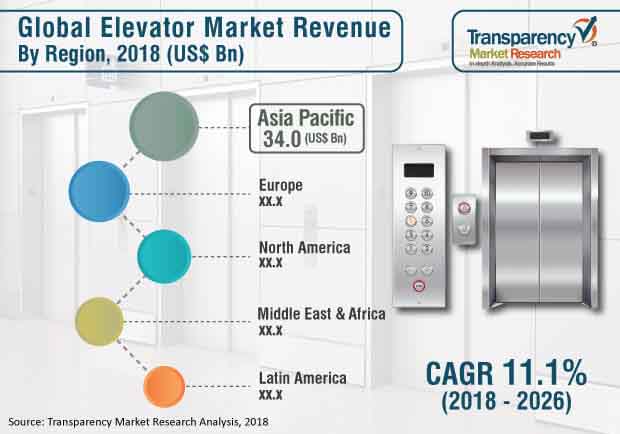 By deck type, single deck elevator has the highest growth opportunities as it is cost effective and ideal for moderate traffic. Double deck elevator consists of two cabins attached together. Depending on which floor passengers need to go, they can either take the upper or lower deck if they are intended to go either to even or odd floors.

By destination control, the smart elevator segment is expected to rise with new features, enabling passengers to first select the floor they want and then take them to their destination with the fewest number of stops. These elevators are faster and more energy efficient than conventional elevators.

By building height, mid rise segment constitutes the major share in the global elevator market. However, demand for skyscrapers in Asia Pacific countries is increasing, helping to boost the high rise elevators market in the region

By end-use, mix block segment is expected to expand at the highest CAGR during the forecast period as compared to the residential and commercial segment.

By speed, the segment between 1 to 3 m/s has the major share in the global elevator market. However, due to rapid growth of high rise buildings, between 4 to 6 m/s segment is increasing rapidly.

By application, passenger elevators are the most commonly used. Freight elevators are mostly used in the commercial sector to transport goods from one floor to another.